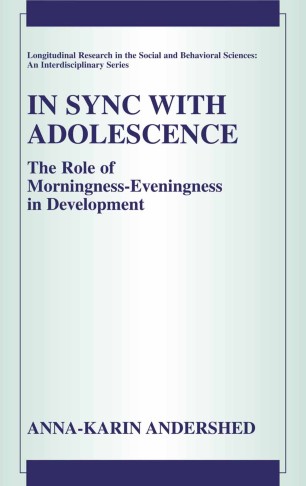 In Sync with Adolescence

The Role of Morningness-Eveningness in Adolescence

At the start of every school day, it’s not an unfamiliar sight to see younger children bounding toward school, bright-eyed and bushy-tailed, ready to seize the day. In contrast, adolescents sometimes seem to sleepwalk toward their middle and high schools, often bleary-eyed, cantankerous, and less than enthusiastic to get down to work. Why the difference?

Recent developmental research has demonstrated a relationship between sleep/wake patterns and different kinds of problem behaviors, including social adjustment problems, family coercion, and disaffection from school. Adolescents who prefer staying up later in the evening and arising late in the morning (i.e., eveningness) have often been considered at greater risk of suffering from such problem behaviors as delinquency and negative relationships with parents and teachers. Those who tend to go to bed and arise earlier (i.e., morningness) have long been associated with more positive outcomes. In the majority of previous research, however, these concepts have never been adequately tested.

In Sync with Adolescence: The Role of Morningness-Eveningness in Development examines the possible effects of adolescent preferences on problem behavior in different contexts. This volume presents a new way of looking at morningness-eveningness in relation to adolescent development in general and on problem behavior in particular. The study has produced results, the implications of which necessitate a reinterpretation of the current thinking about morningness-eveningness and adolescent adjustment.

This volume should be of particular interest to developmental psychologists and researchers who are interested in examining the role of biological factors in psychological processes as well as to sleep researchers who are interested in both the clinical and behavioral aspects. In addition, it is a valuable resource for clinical child and school psychologists, medical staff, teachers, and anyone who works with adolescents.