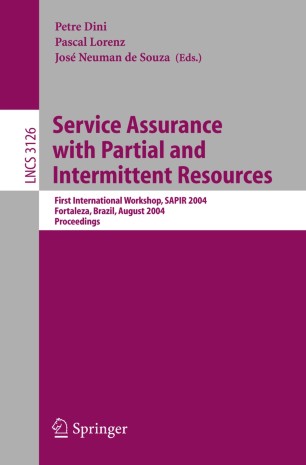 The 1st Workshop on Service Assurance with Partial and Intermittent Resources (SAPIR 2004) was the first event in a series introducing the concept of pi-resources and bridging it with the emerging and important field of distributed and heavily shared resources. The topics concerning this event are driven by a paradigm shift occurring in the last decade in telecommunications and networking considering partial and intermittent resources (pi-resources). The Internet, converged networks, delay-tolerant networks, ad hoc networking, GRID-supporting networks, and satellite communications require a management paradigm shift that takes into account the partial and intermittent availability of resources, including infrastructure (networks, computing, and storage) and service components, in distributed and shared environments. A resource is called partial (p-resource) when only a subset of conditions for it to function to complete specification is met, yet it is still able to provide a (potentially degraded) service, while an intermittent or sporadic resource (i-resource) will be able to provide a service for limited and potentially unpredictable time intervals only. Partial and intermittent services are relevant in environments characterized by high volatility and fluctuation of available resources, such as those experienced in conjunction with component mobility or ad hoc networking, where the notion of traditional service guarantees is no longer applicable. Other characteristics, such as large transmission delays and storage mechanisms during the routing, require a rethinking of today's paradigms with regards to service assurance and how service guarantees are defined.