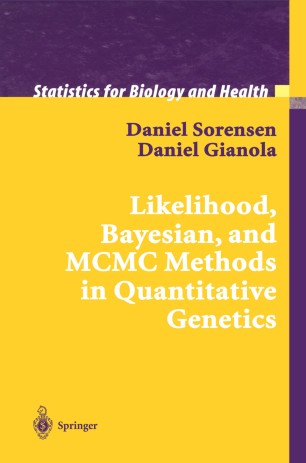 Over the last ten years the introduction of computer intensive statistical methods has opened new horizons concerning the probability models that can be fitted to genetic data, the scale of the problems that can be tackled and the nature of the questions that can be posed. In particular, the application of Bayesian and likelihood methods to statistical genetics has been facilitated enormously by these methods. Techniques generally referred to as Markov chain Monte Carlo (MCMC) have played a major role in this process, stimulating synergies among scientists in different fields, such as mathematicians, probabilists, statisticians, computer scientists and statistical geneticists. Specifically, the MCMC "revolution" has made a deep impact in quantitative genetics. This can be seen, for example, in the vast number of papers dealing with complex hierarchical models and models for detection of genes affecting quantitative or meristic traits in plants, animals and humans that have been published recently.

This book, suitable for numerate biologists and for applied statisticians, provides the foundations of likelihood, Bayesian and MCMC methods in the context of genetic analysis of quantitative traits. Most students in biology and agriculture lack the formal background needed to learn these modern biometrical techniques. Although a number of excellent texts in these areas have become available in recent years, the basic ideas and tools are typically described in a technically demanding style, and have been written by and addressed to professional statisticians. For this reason, considerable more detail is offered than what may be warranted for a more mathematically apt audience.

The book is divided into four parts. Part I gives a review of probability and distribution theory. Parts II and III present methods of inference and MCMC methods. Part IV discusses several models that can be applied in quantitative genetics, primarily from a bayesian perspective. An effort has been made to relate biological to statistical parameters throughout, and examples are used profusely to motivate the developments.