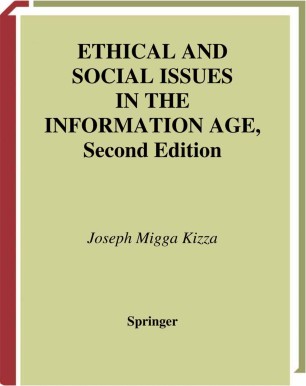 Ethical And Social Issues In The Information Age

Since the publication of the ?rst edition in 1997, there have been tremendous changes in the ?elds of computer science and information sciences. During this period, we have become more dependent than ever before on computer and telecommunication technology. As we, both individually and as nations, become more dependent on cyberspace technology, it has itself become a cr- ical component of individual nation’s security infrastructures that control power grids, gas and oil storage facilities, transportation, and all forms of - tional communication, including emergency services. The recent rise in cyber attacks—many of them with lightning speed, - fecting millions of computers worldwide, and causing billions of dollars in losses both to individuals and businesses—is an indication of how unprepared we are to handle such attacks not only today but also in the future. Such - tacks are a mark of the poor state of our cyberspace security policies. The facts that there are no signs to indicate there is going to be a slowdown in such - tacks, and that nations are not doing anything worth calling preventive, has heightened the need for an effective strategy to produce responsible prof- sionals who can play an active role in the ?ght against computer and cyber - tacks and vandalism.

Dr. Joseph Migga Kizza is Professor and Director of the Center for Information Security and Assurance at the University of Tennessee at Chattanooga, USA.  He is also the author of the successful Springer title Guide to Computer Network Security.