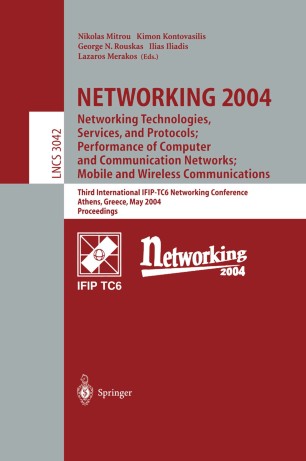 This book contains the refereed proceedings of the 3rd International IFIP-TC6 Networking Conference, Networking 2004. Conferences in the Networking series span the interests of several distinct, but related, TC6 working groups, including Working Groups 6.2, 6.3, and 6.8. Re?ecting this, the conference was structured with three Special Tracks: (i) Networking Technologies, Services, and Protocols; (ii) Performance of Computer and Communication Networks; and (iii) Mobile and Wireless Communications. However, beyond providing a forum for the presentation of high-quality - search in various complementary aspects of networking, the conference was also targetedtocontributingtoauni?edviewofthe?eldandtofosteringtheinter- tion and exchange of fruitful ideas between the various related (and overlapping) specialized subcommunities therein. Towards this second objective, more than a few conference sessions (and thematic sections in this book) ‘cut across’ the Special Tracks, along more generic or fundamental concepts. Networking 2004 was fortunate to attract very high interest among the c- munity, and the conference received 539 submissions from 44 countries in all ?ve continents. These ?gures correspond to a remarkable increase in subm- sions from the previous very successful events (roughly, a 156% increase over Networking 2000 and 71% over Networking 2002), and indicate that Netw- king conferences are progressively becoming established as worldwide reference events in the ?eld.