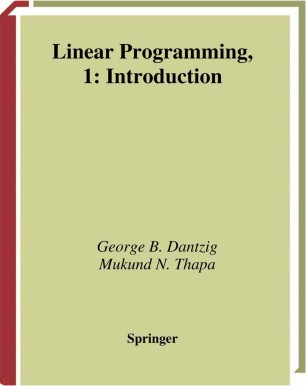 By George B. Dantzig LINEAR PROGRAMMING The Story About How It Began: Some legends, a little about its historical sign- cance, and comments about where its many mathematical programming extensions may be headed. Industrial production, the ?ow of resources in the economy, the exertion of military e?ort in a war, the management of ?nances—all require the coordination of interrelated activities. What these complex undertakings share in common is the task of constructing a statement of actions to be performed, their timing and quantity(calledaprogramorschedule), that, ifimplemented, wouldmovethesystem from a given initial status as much as possible towards some de?ned goal. While di?erences may exist in the goals to be achieved, the particular processes, and the magnitudes of e?ort involved, when modeled in mathematical terms these seemingly disparate systems often have a remarkably similar mathematical str- ture. The computational task is then to devise for these systems an algorithm for choosing the best schedule of actions from among the possible alternatives. The observation, in particular, that a number of economic, industrial, ?nancial, and military systems can be modeled (or reasonably approximated) by mathem- ical systems of linear inequalities and equations has given rise to the development of the linear programming ?eld.