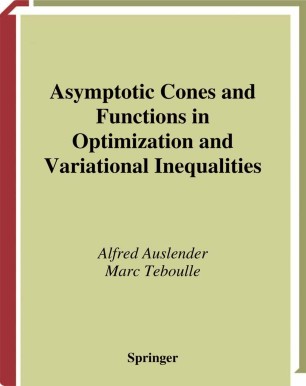 Asymptotic Cones and Functions in Optimization and Variational Inequalities

Nonlinear applied analysis and in particular the related ?elds of continuous optimization and variational inequality problems have gone through major developments over the last three decades and have reached maturity. A pivotal role in these developments has been played by convex analysis, a rich area covering a broad range of problems in mathematical sciences and its applications. Separation of convex sets and the Legendre–Fenchel conjugate transforms are fundamental notions that have laid the ground for these fruitful developments. Two other fundamental notions that have contributed to making convex analysis a powerful analytical tool and that haveoftenbeenhiddeninthesedevelopmentsarethenotionsofasymptotic sets and functions. The purpose of this book is to provide a systematic and comprehensive account of asymptotic sets and functions, from which a broad and u- ful theory emerges in the areas of optimization and variational inequa- ties. There is a variety of motivations that led mathematicians to study questions revolving around attaintment of the in?mum in a minimization problem and its stability, duality and minmax theorems, convexi?cation of sets and functions, and maximal monotone maps. In all these topics we are faced with the central problem of handling unbounded situations.