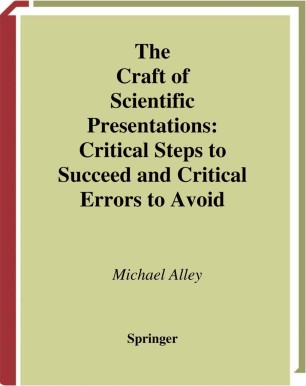 The Craft of Scientific Presentations

Critical Steps to Succeed and Critical Errors to Avoid

On March 21, 1949, I attended a lecture given by Linus Pauling.... That talk was the best talk by anyone on any subject that I had ever heard…. The talk was more than a talk to me. It filled me with a 1 desire of my own to become a speaker. —Issac Asimov At the first stop of a tour in Japan, Albert Einstein gave a scientific presentation that, with the accompanying tra- lation, lasted four hours. Although his audience appeared to be attentive the entire time, Einstein worried about their comfort and decided to pare back the presentation for the next stop on his tour. At the end of the second pres- tation, which lasted two and a half hours, the crowd did an unusual thing in Japanese culture, particularly in that era. They complained. For Einstein, though, the complaint was a compliment—this crowd had wanted him to de- 2 liver the longer version.