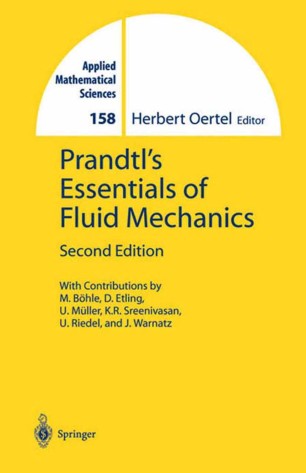 Ludwig Prandtl, with his fundamental contributions to hydrodynamics, aerodynamics and gasdynamics, greatly influenced the development of fluid mechanics as a whole and it was his pioneering research in the first half of the 20th century that founded modern fluid mechanics. His book `Fuhrer durch die Stromungslehre’ or `Essentials of Fluid Mechanics’ appeared in 1942. Even today it is considered one of the most important books in the area.

For this 10th edition the initial chapters, although updated throughout, follow the path marked out by Prandtl in his first edition. The major difference lies in the treatment of additional topics of fluid mechanics and chapters 7-14 were updated by key international researchers in the area bringing the subject up to date whilst keeping Prandtl’s purpose in mind.

Essentials of Fluid Mechanics is aimed at science and engineering students and researchers wishing to obtain an overview of the different branches of fluid mechanics. The book is extensively illustrated throughout and includes problems to aid learning in many chapters.

Reviews of this edition:

`The history of Ludwig Prandtl's book "Essentials of Fluid Mechanics" is one of unique success. It has achieved worldwide fame as a standard work covering practically all areas of fluid mechanics. For this tenth edition the entire text has been reworked and in part rearranged. Those subject areas that are presently undergoing great changes have been brought up to date and new chapters on "Fluid Mechanical Instabilities", "Flows with Chemical Reactions" and "Biofluid Mechanics" have been added. This new edition maintains the successful tradition of the Prandtl book and I hope it will achieve the same global acceptance as the earlier editions.’

`This 10th edition has been edited and modernized by Professor H Oertel and a distinguished cadre of his colleagues.The strength of this book is its breadth, which in addition to the basic topics in fluid mechanics introduces the reader to topics rarely found in one place: aerodynamics, turbulence, instabilities, convective heat/mass transport, multiphase reactive, geophysical, and biomechanical flows, as well as thermal turbomachinery. I know of no single place in which one can find such a spectrum of topics, in itself, a tribute to the interests of Prandtl.’