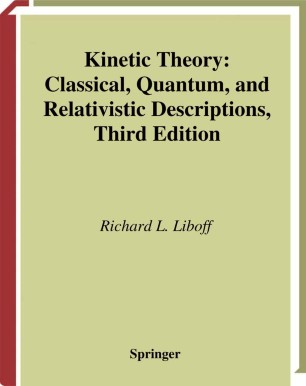 Kinetic Theory: Classical, Quantum, and Relativistic Descriptions goes beyond the scope of other works in the field with its thorough treatment of applications in a wide variety of disciplines. Its clear exposition and emphasis on concrete examples will make it not only an excellent graduate text but also a valuable resource for researchers in such disciplines as aerospace, mechanical, and chemical engineering; astrophysics, solid state and laser physics and devices, plasma physics, and controlled and thermonuclear fusion.

Among the topics covered are:
- The Liouville equation and analyses of the Liouville equation, including two independent derivations
- The Boltzmann equation and Boltzmann's H-theorem
- Analysis of the linearized collision operator
- Fluid dynamics and irreversibility
- Assorted kinetic equations with applications to plasmas and neutral fluids
- Elements of quantum kinetic theory, including the Green's-function formalism and the Wigner-Moyal equation
- Relativistic kinetic theory and Lorentz invariants
- Kinetic properties of metals and amorphous media
- Monte-Carlo analysis in kinetic theory
- Kinetic study of shock waves

This third revised edition features a new section on constants of motion and symmetry and a new appendix on the Lorentz-Legendre expansion.