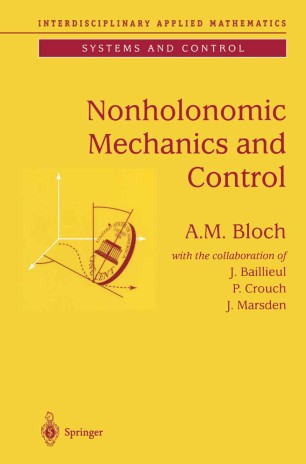 Nonholonomic Mechanics and Control develops the rich connections between control theory and geometric mechanics. Control theory is linked with a geometric view of classical mechanics in both its Lagrangian and Hamiltonian formulations and especially with the theory of nonholonomic mechanics (mechanical systems subject to motion constraints). Both controllability and optimal control are treated, including the Pontryagin maximum principle. In addition, the stability, control, and stabilization of mechanical systems are discussed. In particular, these items are considered for nonholonomic systems. The aim of the book is to provide a unified treatment of nonlinear control theory and constrained mechanical systems, incorporating material that has not yet made its way into texts and monographs. Detailed illustrations and exercises are included throughout the text.

This book is intended for graduate and advance undergraduate students in mathematics, physics and engineering who wish to learn this subject and for researchers in the area who want to enhance their techniques.