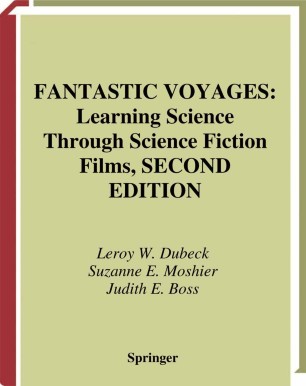 What principle of mechanics is illustrated in the science fiction thriller Terminator 2: Judgment Day? How is nuclear fission important to the plot of Aliens? Is the time travel portrayed in Star Trek IV: The Voyage Home a real possibility? Discover the surprising answers to these and a host of other intriguing questions in Fantastic Voyages.

This book provides basic physics and biology instruction using scenes from popular science fiction films as examples of the concepts discussed. Scenes are discussed from such sci-fi classics as The Day the Earth Stood Still, Planet of the Apes and The Andromeda Strain. The latter includes study questions on biological terrorism. More recent hit films discussed include Contact, Jurassic Park and Independence Day.

The book is divided into three sections:

The new edition also contains material about the greenhouse effect, nuclear power and nuclear terrorism, and the effects of an impact from a comet or asteroid.

Acclaim for the previous edition:

"If you find science fiction films thought-provoking, this could be the book for you...The scope of the book is wide, with a good grounding in basic physics and biology, and a lot of other information besides."

"The idea of using science fiction films to convey science in an interesting way is sound, and anyone preparing a course using the genre should at least consult this book."

Suzanne E. Moshier is Professor of Biology at the University of Nebraska, Omaha.

Judith E. Boss is Professor of English at the University of Nebraska, Omaha.