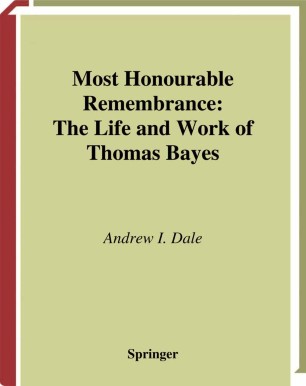 The Life and Work of Thomas Bayes

Most Honourable Remembrance provides an in-depth discussion of the life and work of Thomas Bayes, an eighteenth-century Presbyterian minister and lay mathematician who planted the seed of modern Bayesian Statistics in 1763 with his posthumous, An Essay Towards Solving a Problem in the Doctrine of Chances. After biographical details of Bayes' ancestors, consideration is turned to what is known of Thomas Bayes, the time in which he lived, and also the town in which he spent the major part of his professional life, Tunbridge Wells.

Bayes' published works, ranging from a theological tract to one on fluxions, are reprinted in full and commented upon. Unpublished works, with commentary, are also included, special attention being given to a manuscript notebook in which some early work on a result from the above mentioned Essay may be found. The book concludes with a chapter on Bunhill Fields Burial Ground, where the Bayes family vault is still to be seen and where many prominent Nonconformists were interred.

This book is the first to provide a biography and full discussion of Bayes' works and will be of interest to modern Bayesian statisticians as well as to mathematicians who may well be surprised at some of the mathematical insights shown by Bayes and which are not generally known to be attributable to him.