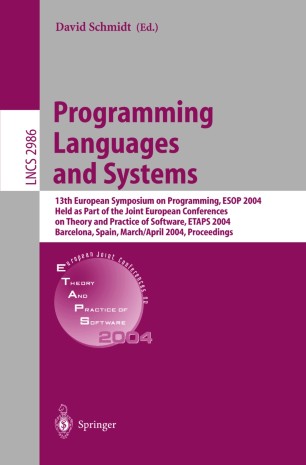 This volume contains the 28 papers presented at ESOP 2004, the 13th European Symposium on Programming, which took place in Barcelona, Spain, March 29– 31, 2004. The ESOP series began in 1986 with the goal of bridging the gap between theory and practice, and the conferences continue to be devoted to explaining fundamental issues in the speci?cation, analysis, and implementation of programming languages and systems. The volume begins with a summary of an invited contribution by Peter O’Hearn,titledResources,ConcurrencyandLocalReasoning,andcontinueswith the 27 papers selected by the Program Committee from 118 submissions. Each submission was reviewed by at least three referees, and papers were selected during a ten-day electronic discussion phase. I would like to sincerely thank the members of the Program Committee, as well as their subreferees, for their diligent work; Torben Amtoft, for helping me collect the papers for the proceedings; and Tiziana Margaria, Bernhard Ste?en, and their colleagues at MetaFrame, for the use of their conference management software.