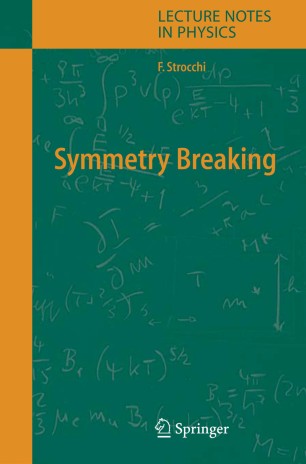 The intriguing mechanism of spontaneous symmetry breaking is a powerful innovative idea at the basis of most of the recent developments in theoretical physics, from statistical mechanics to many-body theory to elementary particles theory; for infinitely extended systems a symmetric Hamiltonian can account for non symmetric behaviours, giving rise to non symmetric realizations of a physical system.

In the first part of this book, devoted to classical field theory, such a mechanism is explained in terms of the occurrence of disjoint sectors and their stability properties and of an improved version of the Noether theorem.

For infinitely extended quantum systems, discussed in the second part, the mechanism is related to the occurrence of disjoint pure phases and characterized by a symmetry breaking order parameter, for which non perturbative criteria are discussed, following Wightman, and contrasted with the standard Goldstone perturbative strategy. The Goldstone theorem is discussed with a critical look at the hypotheses that emphasizes the crucial role of the dynamical delocalization induced by the interaction range. The Higgs mechanism in local gauges is explained in terms of the Gauss law constraint on the physical states. The mathematical details are kept to the minimum required to make the book accessible to students with basic knowledge of Hilbert space structures. Much of the material has not  appeared in other textbooks.