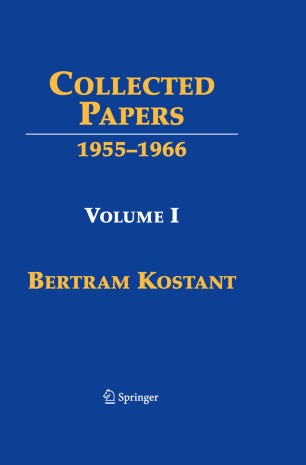 For more than five decades Bertram Kostant has been one of the major architects of modern Lie theory. Virtually all his papers are pioneering with deep consequences, many giving rise to whole new fields of activities. His interests span a tremendous range of Lie theory, from differential geometry to representation theory, abstract algebra, and mathematical physics. Some specific topics cover algebraic groups and invariant theory, the geometry of homogeneous spaces, representation theory, geometric quantization and symplectic geometry, Lie algebra cohomology, Hamiltonian mechanics, modular forms, Whittaker theory, Toda lattice, and much more. It is striking to note that Lie theory (and symmetry in general) now occupies an ever increasing larger role in mathematics than it did in the fifties.

This is the first volume (1955-1966) of a five-volume set of Bertram Kostant’s collected papers. A distinguished feature of this first volume is Kostant’s commentaries and summaries of his papers in his own words.