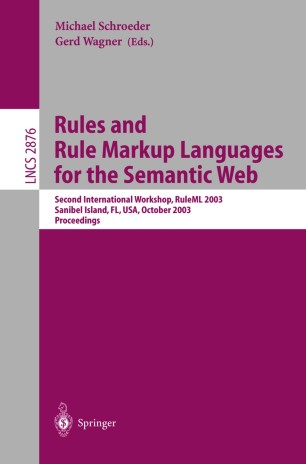 RuleML: International Workshop on Rules and Rule Markup Languages for the Semantic Web

Rules and Rule Markup Languages for the Semantic Web

RuleML 2003 was the second international workshop on rules and rule markup languages for the Semantic Web, held in conjunction with the International Semantic Web Conference (ISWC). The aim of the RuleML workshop series is to stimulate research on all issues related to web rule languages and to provide an annual forum for presenting and discussing new research results. The Semantic Web is a major world-wide endeavor to advance the Web by enriching its multimedia document content with propositional information that can be processed by inference-enabled Web applications. Rules and rule markup languages, such as RuleML, will play an important role in the success of the Semantic Web. Rules will act as a means to draw inferences, to express constraints,tospecifypoliciesforreactingtoevents,totransformdata,etc.Rule markup languages will allow us to enrich Web ontologies by adding de?nitions of derived concepts, to publish rules on the Web, to exchange rules between di?erent systems and tools, etc. RuleML 2003 built on the success of RuleML 2002, which was held in c- junction with ISWC 2002, Sardinia, Italy. The proceedings of RuleML 2002 can be found at http://www.ceur-ws.org/Vol-60/. Special highlights of the RuleML 2003 workshop were the two invited pres- tationsgivenbyPeterChenon“Rules,XML,andtheERModel”andbyHarold Boley on “Object-Oriented RuleML: User-Level Roles, URI-Grounded Clauses, and Order-Sorted Terms”. This proceedings volume also contains an invited - per by Francois ¸ Bry and Sebastian Scha?ert on “An Entailment Relation for Reasoning on the Web”.