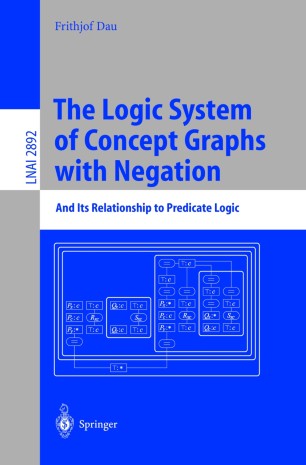 The Logic System of Concept Graphs with Negation

And Its Relationship to Predicate Logic

The aim of contextual logic is to provide a formal theory of elementary logic, which is based on the doctrines of concepts, judgements, and conclusions. Concepts are mathematized using Formal Concept Analysis (FCA), while an approach to the formalization of judgements and conclusions is conceptual graphs, based on Peirce's existential graphs. Combining FCA and a mathematization of conceptual graphs yields so-called concept graphs, which offer a formal and diagrammatic theory of elementary logic.

Expressing negation in contextual logic is a difficult task. Based on the author's dissertation, this book shows how negation on the level of judgements can be implemented. To do so, cuts (syntactical devices used to express negation) are added to concept graphs. As we can express relations between objects, conjunction and negation in judgements, and existential quantification, the author demonstrates that concept graphs with cuts have the expressive power of first-order predicate logic. While doing so, the author distinguishes between syntax and semantics, and provides a sound and complete calculus for concept graphs with cuts. The author's treatment is mathematically thorough and consistent, and the book gives the necessary background on existential and conceptual graphs.