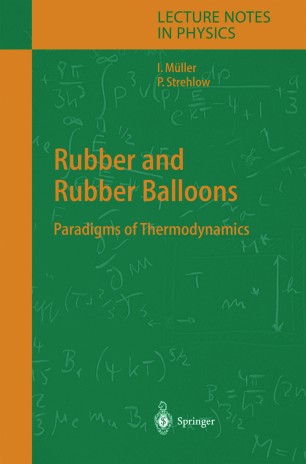 Experiments with rubber balloons and rubber sheets have led to surprising observations, some of them hitherto unknown or not previously described in the literature. In balloons, these phenomena are due to the non-monotonic pressure-radius characteristic which makes balloons a subject of interest to physicists engaged in stability studies. Here is a situation in which symmetry breaking and hysteresis may be studied analytically, because the stress-stretch relations of rubber - and its non-convex free energy - can be determined explicitly from the kinetic theory of rubber and from non-linear elasticity.

Thus rubber and rubber balloons furnish instructive paradigms of thermodynamics. This monograph treats the subject at a level appropriate for post-graduate studies.