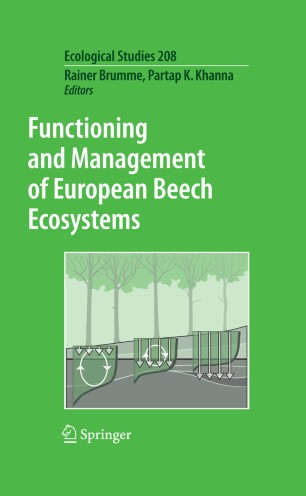 Temperate forests cover large areas of Europe and perform a number of important functions such as the regulation of energy and matter, production of wood and other resources, and conservation of biodiversity and habitats; they also have special signi?cance in social and cultural contexts. Initiated in 1960s, the ?rst International Biological Program (IBP) focused on ‘‘the biological basis of productivity and human welfare. ’’ As the German contribution to the IBP, ecosystem research has been carried out since 1966 in the Solling area (Ellenberg H. , Ecological Studies 2, 1971), an upland region in Northwest Germany. This study provided clear evidence that the stability of forest ecosystems was threatened by the high inputs of at- spheric pollutants. This promoted many interdisciplinary research programs which were coordinated by Prof. Dr. Bernhard Ulrich and the Forest Ecosystems Research Center of the University of Go¨ttingen. This involved, in addition to the Solling site, the establishment of two other sites for long-term monitoring of ecosystem pro- ¨ cesses. The two contrasting sites were established in 1980 at Gottinger Wald on base-rich calcareous soil and in 1989 at Zierenberg on volcanic soil. These projects were funded initially by the Federal Ministry of Research and Technology (BMBF) as interdisciplinary projects under the titles: ‘‘Conditions of Stability of Forest Ecosystems’’ (1989–1993), and ‘‘Dynamics of Forest Ecos- tems’’ (1993–1998). The primary goal of these studies was to quantify the ecolo- cal condition of forests in a changing environment and element ?uxes.