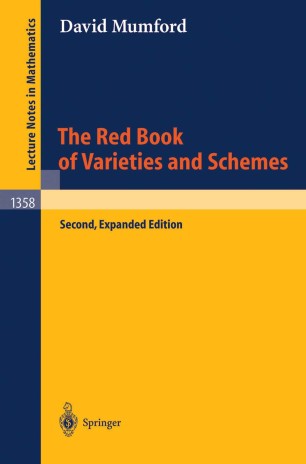 The Red Book of Varieties and Schemes

Mumford's famous Red Book gives a simple readable account of the basic objects of algebraic geometry, preserving as much as possible their geometric flavor and integrating this with the tools of commutative algebra. It is aimed at graduate students or mathematicians in other fields wishing to learn quickly what algebraic geometry is all about.
This new edition also includes an overview of the theory of curves, their moduli spaces and their Jacobians, one of the most exciting fields within algebraic geometry. The book is aimed at graduate students and professors seeking to learn
i) the concept of "scheme" as part of their study of algebraic geometry and
ii) an overview of moduli problems for curves and of the use of theta functions to study these.

"This is the second edition of a famous and well-known introduction to algebraic geometry, written to show that the language of schemes is fundamentally geometrical and clearly expressing the intuition of algebraic geometry. ... This book can strongly be recommended to anybody interested in algebraic geometry and willing to learn about varieties and schemes and their main problems."
EMS Newsletter, Vol. 37, Sept. 2000
Buy options