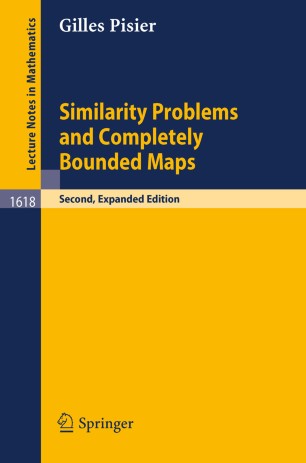 These notes revolve around three similarity problems, appearing in three different contexts, but all dealing with the space B(H) of all bounded operators on a complex Hilbert space H. The first one deals with group representations, the second one with C* -algebras and the third one with the disc algebra. We describe them in detail in the introduction which follows. This volume is devoted to the background necessary to understand these three problems, to the solutions that are known in some special cases and to numerous related concepts, results, counterexamples or extensions which their investigation has generated. While the three problems seem different, it is possible to place them in a common framework using the key concept of "complete boundedness", which we present in detail. Using this notion, the three problems can all be formulated as asking whether "boundedness" implies "complete boundedness" for linear maps satisfying certain additional algebraic identities. Two chapters have been added on the HALMOS and KADISON similarity problems.