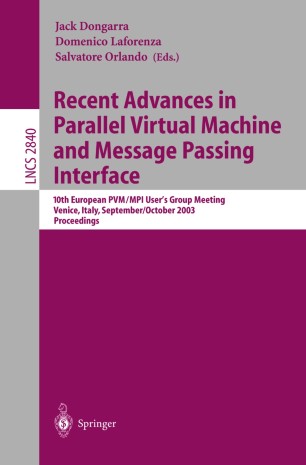 Themessagepassingparadigmisconsideredthemoste?ectivewaytodevelop- ?cient parallel applications. PVM (Parallel Virtual Machine) and MPI (Message Passing Interface) are the most frequently used tools for programming message passing applications. This volume includes the selected contributions presented at the 10th - ropean PVM/MPI Users’ Group Meeting (Euro PVM/MPI 2003), which was held in Venice, Italy, September 29–October 2, 2003. The conference was jointly organized by the Department of Computer Science of the Ca’ Foscari University of Venice, Italy and the Information Science and Technologies Institute of the National Research Council (ISTI-CNR), Pisa, Italy. TheconferencewaspreviouslyheldinLinz,Austria(2002),Santorini,Greece (2001), Balatonfured, ¨ Hungary (2000), Barcelona, Spain (1999), Liverpool, UK (1998), and Krakow, Poland (1997). The ?rst three conferences were devoted to PVM and were held in Munich, Germany (1996), Lyon, France (1995), and Rome, Italy (1994). The conference has become a forum for users and developers of PVM, MPI, and other message passing environments. Interactions between these groups has proved to be very useful for developing new ideas in parallel computing, and for applying some of those already existent to new practical ?elds. The main topics of the meeting were evaluation and performance of PVM and MPI, ext- sions, implementations and improvements of PVM and MPI, parallel algorithms using the message passing paradigm, and parallel applications in science and engineering. In addition, the topics of the conference were extended to include Grid computing, in order to re?ect the importance of this area for the hi- performance computing community.