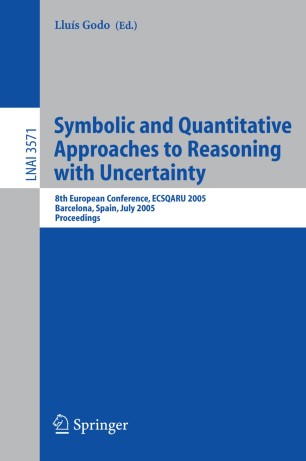 ECSQARU: European Conference on Symbolic and Quantitative Approaches to Reasoning and Uncertainty

Symbolic and Quantitative Approaches to Reasoning with Uncertainty

These are the proceedings of the 8th European Conference on Symbolic and Quantitative Approaches to Reasoning with Uncertainty, ECSQARU 2005, held in Barcelona (Spain), July 6–8, 2005. The ECSQARU conferences are biennial and have become a major forum for advances in the theory and practice of r- soning under uncertainty. The ?rst ECSQARU conference was held in Marseille (1991), and after in Granada (1993), Fribourg (1995), Bonn (1997), London (1999), Toulouse (2001) and Aalborg (2003). The papers gathered in this volume were selected out of 130 submissions, after a strict review process by the members of the Program Committee, to be presented at ECSQARU 2005. In addition, the conference included invited lectures by three outstanding researchers in the area, Seraf´ ?n Moral (Imprecise Probabilities), Rudolf Kruse (Graphical Models in Planning) and J´ erˆ ome Lang (Social Choice). Moreover, the application of uncertainty models to real-world problems was addressed at ECSQARU 2005 by a special session devoted to s- cessful industrial applications, organized by Rudolf Kruse. Both invited lectures and papers of the special session contribute to this volume. On the whole, the programme of the conference provided a broad, rich and up-to-date perspective of the current high-level research in the area which is re?ected in the contents of this volume. IwouldliketowarmlythankthemembersoftheProgramCommitteeandthe additional referees for their valuable work, the invited speakers and the invited session organizer.