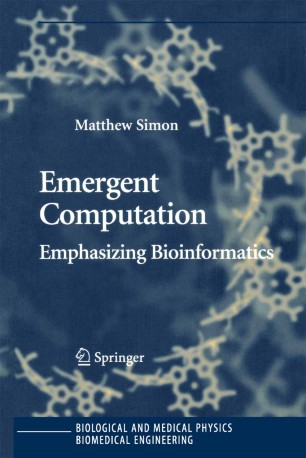 Emergent Computation is concerned with recent applications of Mathematical Linguistics or Automata Theory. This subject has a primary focus upon "Bioinformatics" (the Genome and arising interest in the Proteome), but the closing chapter also examines applications in Biology, Medicine, Anthropology, etc.

The book is composed of an organized examination of DNA, RNA, and the assembly of amino acids into proteins. Rather than examine these areas from a purely mathematical viewpoint (that excludes much of the biochemical reality), the author uses scientific papers written mostly by biochemists based upon their laboratory observations. Thus while DNA may exist in its double stranded form, triple stranded forms are not excluded. Similarly, while bases exist in Watson-Crick complements, mismatched bases and abasic pairs are not excluded, nor are Hoogsteen bonds. Just as there are four bases naturally found in DNA, the existence of additional bases is not ignored, nor amino acids in addition to the usual complement of 20. Can there be more than "64" possible codons? RNA is examined from the point of view of Nussinov plots.

All information is presented from the point of view of regular, context-free, and context sensitive languages, as well as Turing machines and Sequential Machines (and their corresponding semi-groups). Relationships to other subjects of mathematics such as Complex numbers, Quaternions, Algebraic-Topology, and Knot Theory are also mentioned. An examination is made of Splicing Systems as well as Dominoes. Shortcomings illustrating the dangers of mathematical abstractions that ignore biochemistry are pointed out.

The papers examine the subjects of interest from the point of view of applying language theory to search for new results, but also as biological-automatons (implementations or machines) to do calculations.

This book will be of value to those studying Bioinformatics, Biochemistry, Computer-Science, Mathematical Linguistics, and Biology, as well as Pharmacology (with the possible promise of medically active artificial DNA, RNA, and proteins). Laboratory results to demonstrate the usefulness of the topics discussed are demonstrated both in vitro and in vivo.