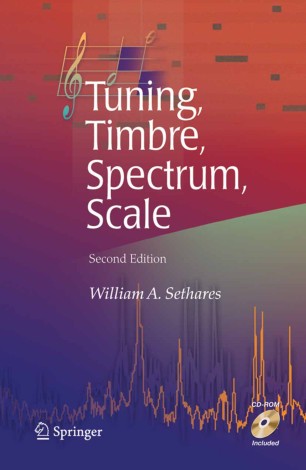 Tuning, Timbre, Spectrum, Scale focuses on perceptions ofconsonance and dissonance, and how these are dependent on timbre. This alsorelates to musical scale: certain timbres sound more consonant in some scalesthan others. Sensory consonance and the ability to measure it have importantimplications for the design of audio devices and for musical theory andanalysis. Applications include methods of adapting sounds for arbitrary scales,ways to specify scales for nonharmonic sounds, and techniques of soundmanipulation based on maximizing (or minimizing) consonance. Specialconsideration is given here to a new method of adaptive tuning that canautomatically adjust the tuning of a piece based its timbral character so as tominimize dissonance. Audio examples illustrating the ideas presented areprovided for free on the Springer Extras website (http://extras.springer.com). Thisunique analysis of sound and scale will be of interest to physicists andengineers working in acoustics, as well as to musicians and psychologists