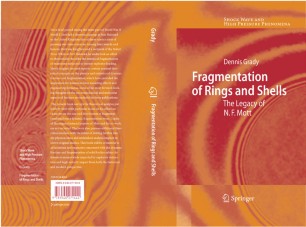 Fragmentation of Rings and Shells

The Legacy of N.F. Mott

For a brief period during the latter part of World War II, Nevill F. Mott led a theoretical group at Fort Halstead in the United Kingdom that tackled scientific issues related to pressing war-time concerns. Among later awards and honors, Mott was knighted and a recipient of the Nobel Prize. While at Fort Halstead, he undertook an effort to theoretically describe the statistical fragmentation of munitions subjected to intense explosive loading. Mott`s original internal reports contain seminal theoretical concepts on the physics and statistics of dynamic fracture and fragmentation, which have provided the inspiration for numerous later modeling efforts and engineering formulae. Some of his most forward-looking thoughts on the micromechanical and molecular aspects of fracture are included in these publications.

The present book surveys the theoretical analysis put forth by Mott with particular focus on his efforts to characterize the size and distribution of fragments resulting from a dynamic fragmentation event. Copies of the original internal reports of Mott and his co-workers are included. The book also pursues additional theoretical analysis with the intent of delving further into the physical ideas and unfinished analysis implicit in Mott`s original studies. This book will be of interest to all scientists and engineers concerned with the dynamic fracture and fragmentation of solid bodies subject to intense transient loads imparted by explosive detonation and high-velocity impact from both the historical and modern perspective.