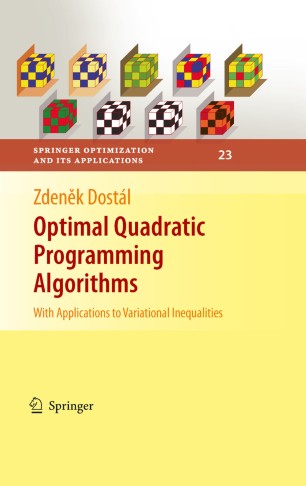 With Applications to Variational Inequalities

Part of the Springer Optimization and Its Applications book series (SOIA, volume 23)

Solving optimization problems in complex systems often requires the implementation of advanced mathematical techniques. Quadratic programming (QP) is one technique that allows for the optimization of a quadratic function in several variables in the presence of linear constraints. QP problems arise in fields as diverse as electrical engineering, agricultural planning, and optics. Given its broad applicability, a comprehensive understanding of quadratic programming is a valuable resource in nearly every scientific field.

Optimal Quadratic Programming Algorithms presents recently developed algorithms for solving large QP problems. The presentation focuses on algorithms which are, in a sense optimal, i.e., they can solve important classes of problems at a cost proportional to the number of unknowns. For each algorithm presented, the book details its classical predecessor, describes its drawbacks, introduces modifications that improve its performance, and demonstrates these improvements through numerical experiments.

This self-contained monograph can serve as an introductory text on quadratic programming for graduate students and researchers. Additionally, since the solution of many nonlinear problems can be reduced to the solution of a sequence of QP problems, it can also be used as a convenient introduction to nonlinear programming. The reader is required to have a basic knowledge of calculus in several variables and linear algebra.