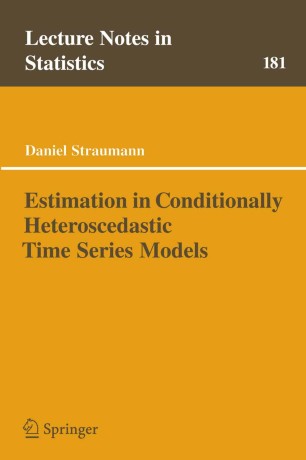 In his seminal 1982 paper, Robert F. Engle described a time series model with a time-varying volatility. Engle showed that this model, which he called ARCH (autoregressive conditionally heteroscedastic), is well-suited for the description of economic and financial price. Nowadays ARCH has been replaced by more general and more sophisticated models, such as GARCH (generalized autoregressive heteroscedastic).

This monograph concentrates on mathematical statistical problems associated with fitting conditionally heteroscedastic time series models to data. This includes the classical statistical issues of consistency and limiting distribution of estimators. Particular attention is addressed to (quasi) maximum likelihood estimation and misspecified models, along to phenomena due to heavy-tailed innovations. The used methods are based on techniques applied to the analysis of stochastic recurrence equations. Proofs and arguments are given wherever possible in full mathematical rigour. Moreover, the theory is illustrated by examples and simulation studies.