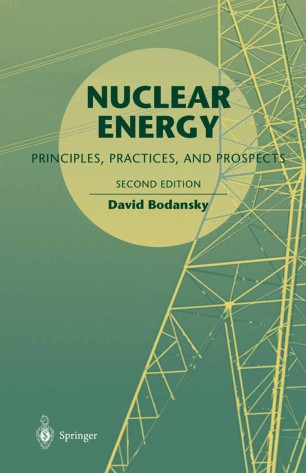 The world faces serious difficulties in obtaining the energy that will be needed in coming decades for a growing population, especially given the problem of climate change caused by fossil fuel use. This book presents a view of nuclear energy as an important carbon-free energy option. It discusses the nuclear fuel cycle, the types of reactors used today and proposed for the future, nuclear waste disposal, reactor accidents and reactor safety, nuclear weapon proliferation, and the cost of electric power. To provide background for these discussions, the book begins with chapters on the history of the development and use of nuclear energy, the health effects of ionizing radiation, and the basic physics principles of reactor operation.

The text has been rewritten and substantially expanded for this edition, to reflect changes that have taken place in the eight years since the publication of the first edition and to provide greater coverage of key topics. These include the Yucca Mountain repository plans, designs for next-generation reactors, weapons proliferation and terrorism threats, the potential of alternatives to nuclear energy, and controversies about low-level radiation.

Acclaim for the first edition:

"…The book provides a superb background for scientists and those in technical fields. It provides probably all the information that many people, including government policy makers, will ever need...[a] well-written and balanced book. This book is recommended for anyone who wants a broad technical background on nuclear energy."
-American Journal of Physics

"The material presented here is largely accessible to anyone interested in nuclear energy. This book is the best of its kind in providing a well-written survey of the science, technology, safety, and economics of the full range of nuclear issues, including power, waste, weapons, terrorism, biological effects, and the future of the nuclear industry. This book is highly recommended both for its content and its accuracy, and should be ready by everyone interested in our nuclear future."