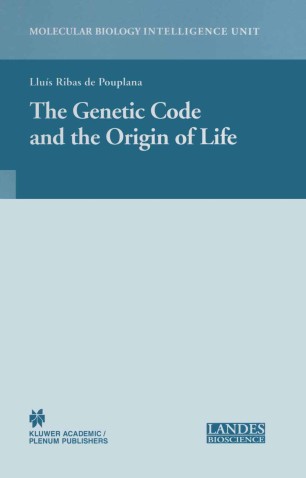 The Genetic Code and the Origin of Life

Early Thoughts on RNA and the Origin of Life The full impact of the essential role of the nucleic acids in biological systems was forcefully demonstrated by the research community in the 1950s. Although Avery and his collaborators had identified DNA as the genetic material responsible for the transformation of bacteria in 1944, it was not until the early 1950s that the Hershey-Chase experiments provided a more direct demonstration of this role. Finally, the structural DNA double helix proposed by Watson and Crick in 1953 clearly created a structural frame­ work for the role of DNA as both information carrier and as a molecule that could undergo the necessary replication needed for daughter cells. Research continued by Kornberg and his colleagues in the mid-1950s emphasized the biochemistry and enzymology of DNA replication. At the same time, there was a growing interest in the role of RNA. The 1956 dis­ covery by David Davies and myself showed that polyadenylic acid and polyuridylic acid could form a double-helical RNA molecule but that it differed somewhat from DN A A large number of experiments were subsequendy carried out with synthetic polyribonucleotides which illustrated that RNA could form even more complicated helical structures in which the specificity of hydrogen bonding was the key element in determining the molecular conformation. Finally, in I960,1 could show that it was possible to make a hybrid helix.