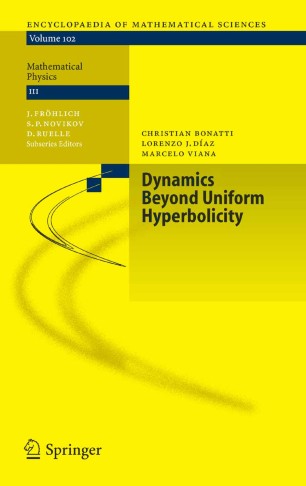 A Global Geometric and Probabilistic Perspective

In broad terms, the goal of dynamics is to describe the long-term evolution of systems for which an "infinitesimal" evolution rule, such as a differential equation or the iteration of a map, is known.

The notion of uniform hyperbolicity, introduced by Steve Smale in the early sixties, unified important developments and led to a remarkably successful theory for a large class of systems: uniformly hyperbolic systems often exhibit complicated evolution which, nevertheless, is now rather well understood, both geometrically and statistically.

Another revolution has been taking place in the last couple of decades, as one tries to build a global theory for "most" dynamical systems, recovering as much as possible of the conclusions of the uniformly hyperbolic case, in great generality.

This book aims to put such recent developments in a unified perspective, and to point out open problems and likely directions for further progress. It is aimed at researchers, both young and senior, willing to get a quick, yet broad, view of this part of dynamics. Main ideas, methods, and results are discussed, at variable degrees of depth, with references to the original works for details and complementary information.

The 12 chapters are organised so as to convey a global perspective of this field, but they have been kept rather independent, to allow direct access to specific topics. The five appendices cover important complementary material.