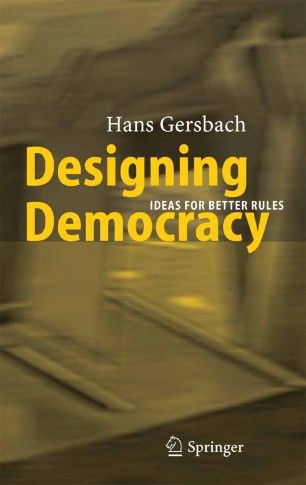 While liberal democracies are the best systems of self-governance for societies, they rarely invoke great enthusiasm. On the one hand, democracies have been known to fail in achieving efficient or fair allocations. On the other hand, many citizens take the democratic system for granted as they have yet to experience an alternative. In this book the vision we propose is that the potential of democ­ racies has not yet been exhausted, and that optimal democracies are both the Utopia for societies and the aim that scientists should be committed to. We present a number of ideas for drawing up new rules to im­ prove the functioning of democracies. The book falls into two parts. The first part examines ways of combining incentive contracts with democratic elections. We suggest that a judicious combina­ tion of these two elements as a dual mechanism can alleviate a wide range of political failures, while at the same time adhering to the founding principles of democracies. The second part presents new rules for decision-making and agenda setting. Together with modern communication devices, these rules can sometimes transcend the limitations of liberal VI Preface democracies in achieving desirable outcomes. Examples of such rules include the flexible majority rule where the size of the ma­ jority required depends on the proposal, or the rule that only those belonging to the winning majority can be taxed.