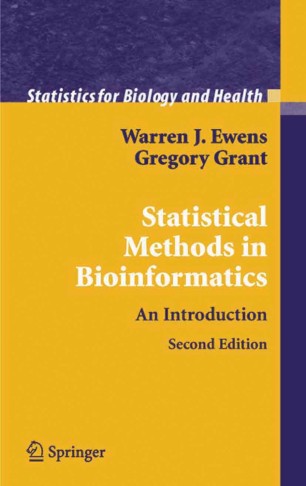 Advances in computers and biotechnology have had a profound impact on biomedical research, and as a result complex data sets can now be generated to address extremely complex biological questions. Correspondingly, advances in the statistical methods necessary to analyze such data are following closely behind the advances in data generation methods. The statistical methods required by bioinformatics present many new and difficult problems for the research community.

This book provides an introduction to some of these new methods. The main biological topics treated include sequence analysis, BLAST, microarray analysis, gene finding, and the analysis of evolutionary processes. The main statistical techniques covered include hypothesis testing and estimation, Poisson processes, Markov models and Hidden Markov models, and multiple testing methods.

The second edition features new chapters on microarray analysis and on statistical inference, including a discussion of ANOVA, and discussions of the statistical theory of motifs and methods based on the hypergeometric distribution. Much material has been clarified and reorganized.

The book is written so as to appeal to biologists and computer scientists who wish to know more about the statistical methods of the field, as well as to trained statisticians who wish to become involved with bioinformatics. The earlier chapters introduce the concepts of probability and statistics at an elementary level, but with an emphasis on material relevant to later chapters and often not covered in standard introductory texts. Later chapters should be immediately accessible to the trained statistician. Sufficient mathematical background consists of introductory courses in calculus and linear algebra. The basic biological concepts that are used are explained, or can be understood from the context, and standard mathematical concepts are summarized in an Appendix. Problems are provided at the end of each chapter allowing the reader to develop aspects of the theory outlined in the main text.

Warren J. Ewens holds the Christopher H. Brown Distinguished Professorship at the University of Pennsylvania. He is the author of two books, Population Genetics and Mathematical Population Genetics. He is a senior editor of Annals of Human Genetics and has served on the editorial boards of Theoretical Population Biology, GENETICS, Proceedings of the Royal Society B and SIAM Journal in Mathematical Biology. He is a fellow of the Royal Society and the Australian Academy of Science.

Comments on the first edition:

"This book would be an ideal text for a postgraduate course…[and] is equally well suited to individual study…. I would recommend the book highly." (Biometrics)

"Ewens and Grant have given us a very welcome introduction to what is behind those pretty [graphical user] interfaces." (Naturwissenschaften)

"The authors do an excellent job of presenting the essence of the material without getting bogged down in mathematical details." (Journal American Statistical Association)

"The authors have restructured classical material to a great extent and the new organization of the different topics is one of the outstanding services of the book." (Metrika)