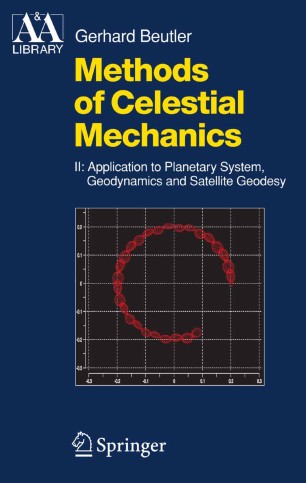 G. Beutler's Methods of Celestial Mechanics is a coherent textbook for students as well as an excellent reference for practitioners. Volume II is devoted to the applications and to the presentation of the program system CelestialMechanics. Three major areas of applications are covered: (1) Orbital and rotational motion of extended celestial bodies. The properties of the Earth-Moon system are developed from the simplest case (rigid bodies) to more general cases, including the rotation of an elastic Earth, the rotation of an Earth partly covered by oceans and surrounded by an atmosphere, and the rotation of an Earth composed of a liquid core and a rigid shell (Poincaré model). (2) Artificial Earth Satellites. The oblateness perturbation acting on a satellite and the exploitation of its properties in practice is discussed using simulation methods (CelestialMechanics) and (simplified) first order perturbation methods. The perturbations due to the higher-order terms of the Earth's gravitational potential and resonant perturbations are considered thereafter. Special attention is paid to satellites of the Global Navigation Satellite Systems and to geostationary satellites. The characteristics of and models for the two most important non-gravitational forces, atmospheric drag and radiation pressure, are presented as well as the most relevant forces acting on high- and low-orbiting satellites. (3) Evolution of the Planetary System. The outer planetary system consisting of the planets Jupiter to Pluto is studied over long time intervals using simulation methods and spectral analysis (CelestialMechanics). The properties of the inner systems, in particular of the Earth's orbit, are made visible by integrating the entire system over long time intervals relevant for climate change. The distribution of minor planets and their orbital properties, regular orbits, and chaotic orbits are easily generated and analyzed using CelestialMechanics. The volume concludes with the discussion of important mathematical tools of the program system and of the principles of spectral analysis.