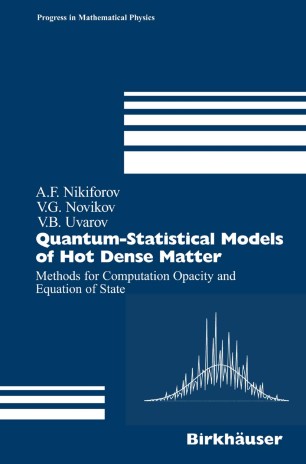 Methods for Computation Opacity and Equation of State

In the processes studied in contemporary physics one encounters the most diverse conditions: temperatures ranging from absolute zero to those found in the cores of stars, and densities ranging from those of gases to densities tens of times larger than those of a solid body. Accordingly, the solution of many problems of modern physics requires an increasingly large volume of information about the propertiesofmatterundervariousconditions,includingextremeones. Atthesame time, there is a demand for an increasing accuracy of these data, due to the fact thatthereliabilityandcomputationalsubstantiationofmanyuniquetechnological devices and physical installations depends on them. The relatively simple models ordinarily described in courses on theoretical physics are not applicable when we wish to describe the properties of matter in a su?ciently wide range of temperatures and densities. On the other hand, expe- ments aimed at generating data on properties of matter under extreme conditions usually face considerably technical di?culties and in a number of instances are exceedingly expensive. It is precisely for these reasons that it is important to - velop and re?ne in a systematic manner quantum-statistical models and methods for calculating properties of matter, and to compare computational results with data acquired through observations and experiments. At this time, the literature addressing these issues appears to be insu?cient. If one is concerned with opacity, which determines the radiative heat conductivity of matter at high temperatures, then one can mention, for example, the books of D. A. Frank-Kamenetskii [67], R. D. Cowan [49], and also the relatively recently published book by D.