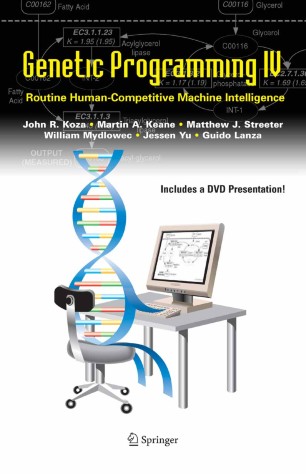 Genetic Programming IV: Routine Human-Competitive Machine Intelligence presents the application of GP to a wide variety of problems involving automated synthesis of controllers, circuits, antennas, genetic networks, and metabolic pathways. The book describes fifteen instances where GP has created an entity that either infringes or duplicates the functionality of a previously patented 20th-century invention, six instances where it has done the same with respect to post-2000 patented inventions, two instances where GP has created a patentable new invention, and thirteen other human-competitive results. The book additionally establishes:

GP is an automated invention machine

`Genetic Programming IV: Routine Human-Competitive Machine Intelligence, demonstrates the everyday solution of such `holy grail' problems as the automatic synthesis of analog circuits, the design of automatic controllers, and the automated programming of computers. To specialists in any of the fields covered by this book's sample problem areas, I say read this book and discover the computer-augmented inventions that are your destiny. To remaining skeptics who doubt the inventive competence of genetics and evolution, I say read this book and change your mind or risk the strong possibility that your doubts will soon cause you significant intellectual embarrassment.'
David E. Goldberg, University of Illinois
`The research reported in this book is a tour de force. For the first time since the idea was bandied about in the 1940s and the early 1950s, we have a set of examples of human-competitive automatic programming.'
John H. Holland, University of Michigan
`John Koza and his colleagues have done remarkable work in advancing the development of genetic programming and applying this to practical problems such as electric circuit design and control system design. I strongly recommend it.'
Bernard Widrow, Electrical Engineering Dept., Stanford University
`John Koza's genetic programming approach to machine discovery can invent solutions to more complex specifications than any other I have seen.'
John McCarthy, Computer Science Dept., Stanford University
Buy options