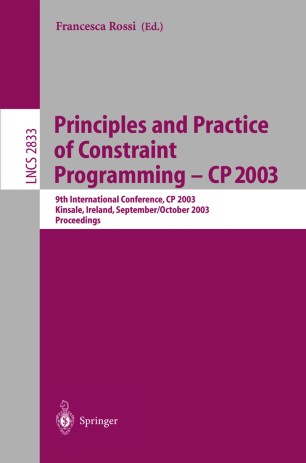 CP: International Conference on Principles and Practice of Constraint Programming

This volume contains the proceedings of the Ninth International Conference on Principles and Practice of Constraint Programming (CP 2003), held in Kinsale, Ireland, from September 29 to October 3, 2003. Detailed information about the CP 2003 conference can be found at the URL http://www.cs.ucc.ie/cp2003/ The CP conferences are held annually and provide an international forum for the latest results on all aspects of constraint programming. Previous CP conferences were held in Cassis (France) in 1995, in Cambridge (USA) in 1996, in Schloss Hagenberg (Austria) in 1997, in Pisa (Italy) in 1998, in Alexandria (USA) in 1999, in Singapore in 2000, in Paphos (Cyprus) in 2001, and in Ithaca (USA) in 2002. Like previous CP conferences, CP 2003 again showed the interdisciplinary nature of computing with constraints, and also its usefulness in many problem domains and applications. Constraint programming, with its solvers, languages, theoretical results, and applications, has become a widely recognized paradigm to model and solve successfully many real-life problems, and to reason about problems in many research areas.