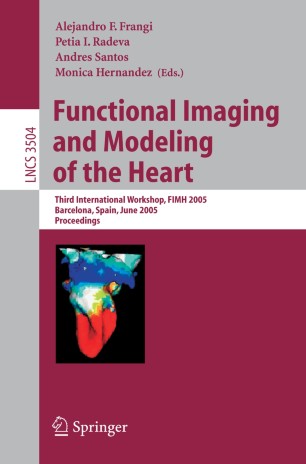 FIMH: International Workshop on Functional Imaging and Modeling of the Heart

Functional Imaging and Modeling of the Heart

The1stand2ndInternationalConferencesonFunctionalImagingandModelling of the Heart (FIMH) were held in Helsinki, Finland, in November 2001, and in Lyon, France, in June 2003. These meetings were born through a fruitful sci- ti?c collaboration between France and Finland that outreached to other groups and led to the start of this biennial event. The FIMH conference was the ?rst attempt to agglutinate researchers from several complementary but often i- lated ?elds: cardiac imaging, signal and image processing, applied mathematics and physics, biomedical engineering and computer science, cardiology, radi- ogy, biology, and physiology. In the ?rst two editions, the conference received an enthusiastic acceptance by experts of all these communities. FIMH was ori- nally started as a European event and has increasingly attracted more and more people from the US and Asia. This edition of FIMH received the largest number of submissions so far with a result of 47 papers being accepted as either oral presentations or posters. There were a number of submissions from non-EU institutions which con?rms the growing interest in this series of meetings. All papers were reviewed by up to four reviewers. The accepted contributions were organized into 8 oral sessions and 3 poster sessions complemented by a number of invited talks. This year we tried to allocate as many papers as possible as oral presentations to facilitate more active participation and to stimulate multidisciplinary discussions.