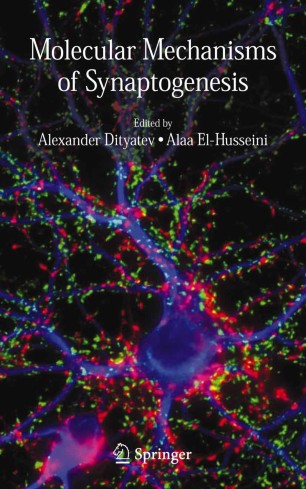 Molecular Mechanisms of Synaptogenesis is a compilation of recent exciting findings that summarizes the ever-expanding knowledge of how neuronal contacts develop in the normal brain and how their functions are affected in mental disorders.

In the last decade, advances in molecular and cellular biology, combined with the development of sophisticated fluorescence microscopy tools to visualize synapses in live neurons, have revealed many intriguing and unexpected findings regarding the dynamics of synapse formation. Studies by a number of researchers have identified several critical protein components of synapses and shown the time course of their arrival at the synapse. Several molecules serve to hold the synaptic contacts between nerve cells and regulate their function.

Imbalance in synaptic contact formation and function has been linked to psychiatric disorders such as schizophrenia, autism and mental retardation. The recent advances in basic research, summarized in Molecular Mechanisms of Synaptogenesis, may lay the necessary scientific groundwork to develop treatments targeting synaptogenesis, allowing us to improve the lives of people affected by brain disorders. This book will be an invaluable resource for neurobiologists taking their first steps in the expanding and exciting field of synaptogenesis.