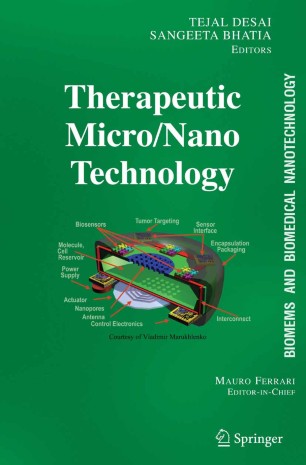 Dr. Tejal Desai is currently an Associate Professor of Physiology and Bioengineering at the University of California, San Francisco. She is also a member of the California Institute for Quantitative Biomedical Research and the UCSF/UCB Bioengineering Graduate Group. Prior to joining UCSF, she was a professor of Biomedical Engineering at Boston University and Associate Director of the Center for Nanoscience and Nanobiotechnology at BU. She received the Sc.B. degree in Biomedical Engineering from Brown University (Providence, RI) in 1994 and the Ph.D. degree in bioengineering from the joint graduate program at University of California, Berkeley and the University of California, San Francisco, in 1998. Dr. Tejal Desai directs the Laboratory of Therapeutic Micro and Nanotechnology.  In addition to authoring over 60 technical papers, she is presently an associate editor of Langmuir, Biomedical Microdevices, and Sensors Letters and is editing a book on Therapeutic Microtechnology. She has chaired and organized several conferences and symposia in the area of bioMEMS, micro and nanofabricated biomaterials, and micro/nanoscale tissue engineering.

Desai's research efforts have earned her numerous awards. In 1999, she was recognized by Crain's Chicago Business magazine with their annual "40 Under 40" award for leadership. She was also named that year by Technology Review Magazine as one of the nation's "Top 100 Young Innovators" and Popular Science’s Brilliant 10. Desai's teaching efforts were recognized when she won the College of Engineering Best Advisor/Teacher Award. She also won the National Science Foundation's "New Century Scholar" award and the NSF Faculty Early Career Development Program "CAREER" award, which recognizes teacher-scholars most likely to become the academic leaders of the 21st century. Her research in therapeutic microtechnology has also earned her the Visionary Science Award from the International Society of BioMEMS and Nanotechnology in 2001, a World Technology Award Finalist in 2004, and the EURAND award for innovative advances in drug delivery.

, is an Associate Professor at the Massachusetts Institute of Technology. Her work focuses on using micro- and nanotechnology tools to repair damaged tissues. Dr. Bhatia trained at Brown, MIT, and Harvard. After postdoctoral training at the Massachusetts General Hospital , she was a member of the Bioengineering Department at University of California at San Diego for 6 years. In 2005, she returned to Boston to join the MIT faculty. She has been awarded the David and Lucile Packard Fellowship given to ‘the nation's most promising young professors in science and engineering,' the MIT TR100 Young Innovators Award, and been named one of San Diego 's '50 People to Watch in 2004'. Her research portfolio includes funding from NIH, NSF, DARPA, NASA, the Whitaker Foundation, the Packard Foundation, and private industry. She co-authored the first undergraduate textbook on tissue engineering and is a frequent advisor to governmental organizations on cell-based sensing, nanobiotechnology, and tissue engineering. She holds 12 issued or pending patents and has worked in industry at Pfizer, Genetics Institute, ICI Pharmaceuticals, and Organogenesis.

Professor Mauro Ferrari is a pioneer in the fields of bioMEMS and biomedical nanotechnology. As a leading academic, a dedicated entrepreneur, and a vision setter for the Nation's premier Federal programs in nanomedicine, he brings a three-fold vantage perspective to his roles as Editor-in-Chief for this work. Dr. Ferrari has authored or co-authored over 150 scientific publications, 6 books, and over 20 US and

Several private sector companies originated from his laboratories at the Ohio State University and the University of California at Berkeley over the years. On a Federal assignment as Special

Expert in Nanotechnology and Eminent Scholar, he has provided the scientific leadership for the development of the Alliance for Cancer Nanotechnology of the National Cancer Institute, the world-largest medical nanotechnology operation to date. Dr. Ferrari trained in mathematical physics in Italy, obtained his Master's and Ph.D. in Mechanical