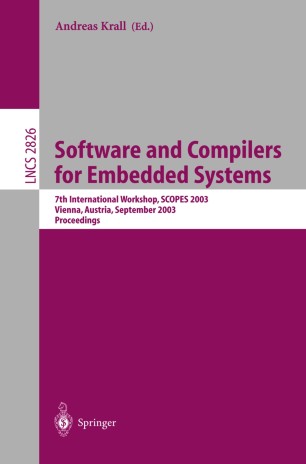 SCOPES: International Workshop on Software and Compilers for Embedded Systems

Software and Compilers for Embedded Systems

This volume contains the proceedings of the 7th International Workshop on Software and Compilers for Embedded Systems, SCOPES 2003, held in Vienna, Austria, September 24–26, 2003. Initially, the workshop was referred to as the International Workshop on Code Generation for Embedded Systems. The ?rst workshop took place in 1994 in Schloss Dagstuhl, Germany. From its beg- nings, the intention of the organizers was to create an atmosphere in which the researcherscould participateactively in dynamic discussionsand pro?t from the assembly of international experts in the ?eld. It was at the fourth workshop, in St. Goar, Germany, in 1999, that the spectrum of topics of interest for the workshop was extended, and not only code generation, but also software and compilers for embedded systems, were considered. The change in ?elds of interest led to a change of name, and this is when the present name was used for the ?rst time. Since then, SCOPES has been held again in St. Goar, Germany, in 2001; Berlin, Germany, in 2002; and this year, 2003, in Vienna, Austria. In response to the call for papers, 43 very strong papers from all over the world were submitted. The program committee selected 26 papers for pres- tation at SCOPES 2003. All submitted papers were reviewed by at least three experts in order to ensure the quality of the work presented at the workshop.