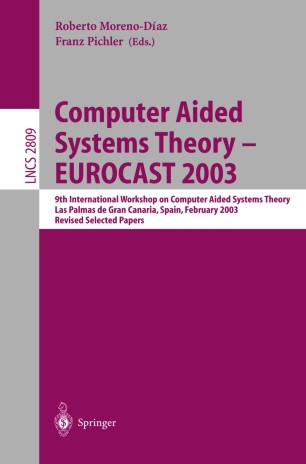 The concept of CAST as Computer Aided Systems Theory, was introduced by F. Pichler of Linz in the late 80’s to include those computer theoretical and practical developments as tools to solve problems in System Science. It was considered as the third component (the other two being CAD and CAM) that will provide for a complete picture of the path from Computer and Systems Sciences to practical developments in Science and Engineering. The University of Linz organized the ?rst CAST workshop in April 1988, which demonstrated the acceptance of the concepts by the scienti?c and technical community. Next, the University of Las Palmas de Gran Canaria joined the University of Linz to organize the ?rst international meeting on CAST, (Las Palmas February 1989), under the name EUROCAST’89, that was a very successful gathering of systems theorists, computer scientists and engineers from most of European countries, North America and Japan. ItwasagreedthatEUROCASTinternationalconferenceswouldbeorganized every two years. Thus, the following EUROCAST meetings took place in Krems (1991), Las Palmas (1993), Innsbruck (1995), Las Palmas (1997), Vienna (1999) and Las Palmas(2001), in addition to an extra-European CAST Conference in Ottawain1994.SelectedpapersfromthosemeetingswerepublishedbySpringer- Verlag Lecture Notes in Computer Science nos. 410, 585, 763, 1030, 1333, 1728 and 2178 and in several special issues of Cybernetics and Systems: an lnternat- nal Journal. EUROCAST and CAST meetings are de?nitely consolidated, as it is demonstrated by the number and quality of the contributions over the years.