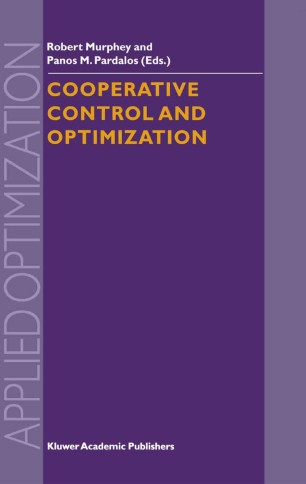 A cooperative system is defined to be multiple dynamic entities that share information or tasks to accomplish a common, though perhaps not singular, objective. Examples of cooperative control systems might include: robots operating within a manufacturing cell, unmanned aircraft in search and rescue operations or military surveillance and attack missions, arrays of micro satellites that form a distributed large aperture radar, employees operating within an organization, and software agents. The term entity is most often associated with vehicles capable of physical motion such as robots, automobiles, ships, and aircraft, but the definition extends to any entity concept that exhibits a time dependent behavior. Critical to cooperation is communication, which may be accomplished through active message passing or by passive observation. It is assumed that cooperation is being used to accomplish some common purpose that is greater than the purpose of each individual, but we recognize that the individual may have other objectives as well, perhaps due to being a member of other caucuses. This implies that cooperation may assume hierarchical forms as well. The decision-making processes (control) are typically thought to be distributed or decentralized to some degree. For if not, a cooperative system could always be modeled as a single entity. The level of cooperation may be indicated by the amount of information exchanged between entities. Cooperative systems may involve task sharing and can consist of heterogeneous entities. Mixed initiative systems are particularly interesting heterogeneous systems since they are composed of humans and machines. Finally, one is often interested in how cooperative systems perform under noisy or adversary conditions.
In December 2000, the Air Force Research Laboratory and the University of Florida successfully hosted the first Workshop on Cooperative Control and Optimization in Gainesville, Florida. This book contains selected refereed papers summarizing the participants' research in control and optimization of cooperative systems.
Audience: Faculty, graduate students, and researchers in optimization and control, computer sciences and engineering.