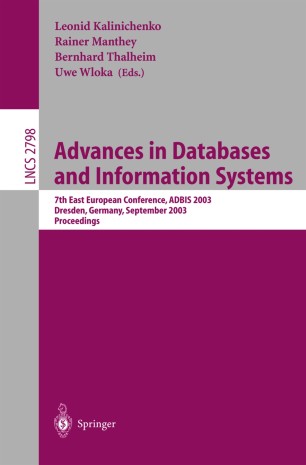 Advances in Databases and Information Systems

This volume contains 29 submitted and 2 invited papers presented at the tenth East-European Conference on Advances in Databases and Information Systems (ADVIS 2003), which took place in Dresden, Germany, September 3–6, 2003. An international program committee of 42 members from 24 countries s- ected these contributions from 86 submissions. Eight additional contributions were selected as short papers and have been published in a separate volume of local proceedings by the organizing institution. For the ?rst time, ADBIS also included an industrial program consisting of nine submitted presentations by representatives of commercial companies active in the database market. ADBIS 2003 was the tenth scienti?c event taking place under the acronym ADBIS, and thus marks a ?rst “jubilee” for this young, but by now we- established,seriesofconferences. ADBISwasfoundedbytheMoscowACMSIG- MOD Chapter in 1993. In 1994–1996 ADBIS was held in the form of workshops organized by the MOSCOW ACM SIGMOD Chapter in collaboration with the RussianFoundationforBasicResearch. Inthisperiod,anumberofinternational guests were invited to Moscow every year in order to improve and consolidate contacts between the national research community in Russia and the research community worldwide. International program committees for ADBIS were es- blished in 1995, contributing to the quality of the selection process and thus of the conference contributions in general. In 1996, following discussions with Dr.