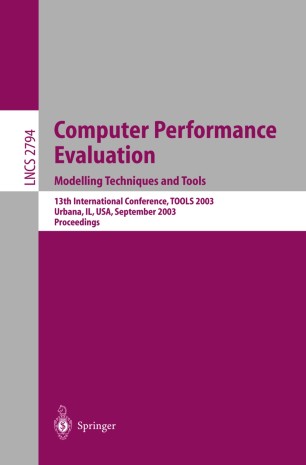 We are pleased to present the proceedings of Performance TOOLS 2003, the 13th International Conference on Modelling Techniques and Tools for Computer Performance Evaluation. The series of TOOLS conferences has provided a forum for our community of performance engineers with all their diverse interests. TOOLS 2003, held in Urbana, Illinois during September 2–5, 2003, was the most recent meeting of the series, which in the past has been held in the following cities: 1984 Paris 1992 Edinburgh 2000 Chicago 1985 Sophia-Antipolis 1994 Vienna 2002 London 1987 Paris 1995 Heidelberg 2003 Urbana 1988 Palma 1997 Saint Malo 1991 Turin 1998 Palma TheproceedingsoftheTOOLSconferenceshavebeenpublishedbySpringer- Verlag in its LNCS series since 1994. TOOLS2003wasthesecondconferenceintheseriestobeheldinthestateof Illinois, USA. It was one of four component conferences that met together under the umbrella of the 2003 Illinois Multiconference on Measurement, Modelling, and Evaluation of Computer-Communication Systems. Other conferences held inconjunctionwithTOOLS2003werethe10thInternationalWorkshoponPetri Nets and Performance Models (PNPM 2003), the International Conference on the Numerical Solution of Markov Chains (NSMC 2003), and the 6th Inter- tional Workshop on Performability Modeling of Computer and Communication Systems (PMCCS-6). The format allowed for a number of joint components in the programs: the three keynote speakers, the tool demonstrations, the tutorials, and the social events were all shared by the participants of the multiconference. Moreover, the PNPM, TOOLS, and NSMC tracks of the multiconference ran concurrently, so that attendees could choose to attend whichever sessions of those component conferences they wished.