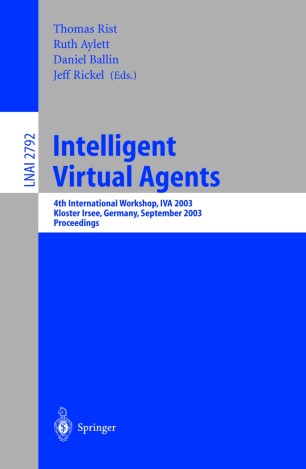 This volume, containing the proceedings of IVA 2003, held at Kloster Irsee, in Germany, September 15–17, 2003, is testimony to the growing importance of IntelligentVirtualAgents(IVAs) asaresearch?eld.Wereceived67submissions, nearly twice as many as for IVA 2001, not only from European countries, but from China, Japan, and Korea, and both North and South America. As IVA research develops, a growing number of application areas and pl- forms are also being researched. Interface agents are used as part of larger - plications, often on the Web. Education applications draw on virtual actors and virtual drama, while the advent of 3D mobile computing and the convergence of telephones and PDAs produce geographically-aware guides and mobile - tertainment applications. A theme that will be apparent in a number of the papers in this volume is the impact of embodiment on IVA research – a char- teristic di?erentiating it to some extent from the larger ?eld of software agents.