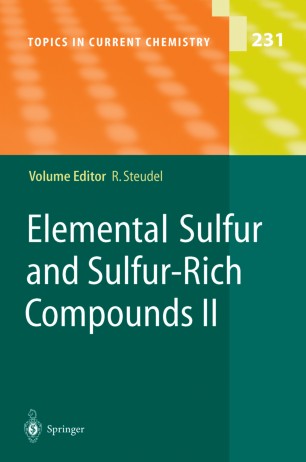 Despite more than 200 years of sulfur research the chemistry of elemental sulfur and sulfur-rich compounds is still full of “white spots” which have to be filled in with solid knowledge and reliable data. This situation is parti- larly regrettable since elemental sulfur is one of the most important raw - terials of the chemical industry produced in record-breaking quantities of ca. 35 million tons annually worldwide and mainly used for the production of sulfuric acid. Fortunately, enormous progress has been made during the last 30 years in the understanding of the “yellow element”. As the result of extensive inter- tional research activities sulfur has now become the element with the largest number of allotropes, the element with the largest number of binary oxides, and also the element with the largest number of binary nitrides. Sulfur, a typical non-metal, has been found to become a metal at high pressure and is even superconducting at 10 K under a pressure of 93 GPa and at 17 K at 260 GPa, respectively. This is the highest critical temperature of all chemical elements. Actually, the pressure-temperature phase diagram of sulfur is one of the most complicated of all elements and still needs further investigation.