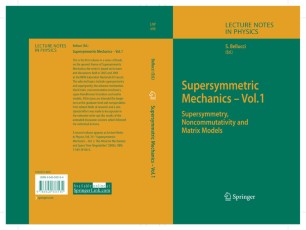 This is the first volume in a series of books on the general theme of Supersymmetric Mechanics; the series is based on lectures and discussions held in 2005 and 2006 at the INFN-Laboratori Nazionali di Frascati. The selected topics include supersymmetry and supergravity, the attractor mechanism, black holes, noncommutative mechanics, super-Hamiltonian formalism and matrix models. All lectures are intended for beginners at the graduate level and nonspecialists from related fields of research and a substantial effort was made to incorporate in the extensive write-ups the results of the animated discussion sessions which followed the individual lectures. A second volume appears as