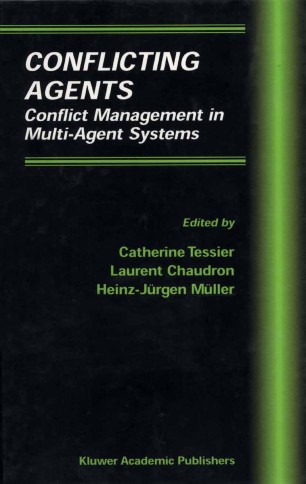 Conflicts between agents acting in a multi-agent environment arise for different reasons, involve different concepts, and are dealt with in different ways, depending on the kind of agents and on the domain where they are considered. Agents may have conflicting beliefs, conflicting goals, or may have to share limited resources. Consequently, conflicts may be expressed as mere differences, or as contradictions, or even as social conflicts. They may be avoided, solved, kept, or even created deliberately.
Conflicting Agents studies conflicts in the context of multi-agent systems, i.e. artificial societies modeled on the basis of autonomous, interacting agents. This book addresses questions about types of conflicts, conflict definitions and the use of conflicts as trigger functions for activities in multi-agent systems. The book is also dedicated to questions of conflict management, resolution and avoidance, i.e. the question of how agents cope with conflicts and conflicting situations.

`...represents a useful reference work on some of the latest approaches to conflict in MAS, in which most working in the field will be likely to find much of interest.'
JASSS, 6/1 (2003)
Buy options